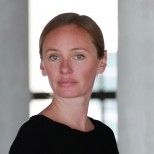 "The collective focus at TFS on hard work and achievement, and the innovative and integrated curriculum laid a strong foundation for future chapters in my life."
When Gabriela received her first camera at age seven, little did she know that her father’s gift would launch a career in photography, taking her on adventures both exciting and dangerous. “I fell in love with photography at TFS,” she confides. “The creative freedom was essential to my pursuit of photography as a career and the encouragement from art teachers Ms. Stewart and Mrs. Markovic was invaluable.” Her most cherished memory? Her first photo exhibit in the Level V art show.
New York City is where it all began professionally for Gabriela. There the Columbia grad published her first photograph, had her first gallery show and landed her first job as a photographer. Gabriela’s exquisite photos have appeared in numerous prestigious publications over the years. In 2008 she moved to Dubai for assignments in the Middle East, a move she describes as a leap into the unknown. That leap was life changing.
While on assignment at Badam Bagh, “the Almond Garden,” Afghanistan’s infamous women’s prison, she was drawn to another story that begged to be told. Almond Garden: Portraits from the Women’s Prisons in Afghanistan was not planned. “The project found me,” explains Gabriela. She would painstakingly spend the next four years shooting beautifully moving portraits of women incarcerated for moral crimes. When her book was published last year to great acclaim, the media attention it received raised awareness internationally and was selected by Time magazine as one of the best photography books of 2015. It is now used by organizations negotiating for the rights of women in Afghanistan.
Advocating for gender equality will always be important to Gabriela, and through her book project she supports Women for Afghan Women, a non-government women's human rights organization. “The relationships I forged with these women drove me. The book is very dear to me.”
This fearless, talented photographer continues to push at boundaries and plunge into new experiences. Honoured to be this year’s Alumni of Distinction Award recipient, she offers these words of wisdom to TFS students: “Work as hard as you can. Your education will shape the rest of your life.”
Back