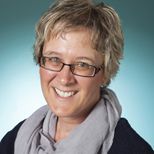 "At TFS, the teachers always encouraged us to understand the principles we studied rather than memorize content. It was a challenging and inspiring way to learn."
Julia Rucklidge ʼ88 wants us to think differently about mental health treatment. A professor of clinical psychology at the University of Canterbury in New Zealand, Julia is a leading world expert in the use of micronutrients to treat mood disorders, ADHD, anxiety and post-traumatic stress. Despite being one of the younger researchers in her field, Julia was named one of the 100 most influential women in New Zealand in 2015.
Julia’s research has led to ground-breaking discoveries about the effect of micronutrients on the expression of mental illness. “People want to believe that what they are doing is the best option,” she says. “When you challenge the current paradigm of how illness can be treated, this can often be met with resistance and great skepticism.”
Julia thinks deeply about the existing data and generates discussion about how mental health treatments can improve. She has been widely published in professional journals and online, gives lectures all over the world, has been profiled extensively in the media and her TEDx talk has logged over half a million views to date. She also interacts daily with people from all over the world who reach out to her about their personal experiences with mental health. Through this work, she has emerged as a tireless advocate for the mentally ill.
“I take pride in being a voice for those who cannot speak for themselves,” she says. “What the health care system is currently doing to help people with mental health challenges is not adequate. Not enough people are getting well in the long-term. We need to research new solutions.”
Julia’s ties to TFS run deep. She attended the school from age three to 18, her mother Adeline Rucklidge was director of services for 16 years and all three of her brothers are also alumni. Julia’s capacity to tackle complex intellectual challenges was nurtured at TFS.
“As a researcher, I challenge existing ideas by asking questions that lead to new ways of thinking,” she says. “I also do the research to find solid evidence. That approach was normal at TFS. The teachers pushed us to think, ask questions and be able to make an argument.”
Touched that TFS would honour her with this award, Julia sees a connection with the adversity she has faced. Julia hopes that current TFS students are inspired to reach beyond any challenges they may face. “My career has been a difficult journey. I would say to any young person at TFS that if you believe in something, pursue it. Be bold and don’t let criticism slow you down.”
Back