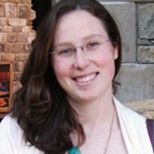 "I was always between science and arts, but I had teachers who were 100% supportive and accepted my diverse interests. I would encourage students to pursue whatever major they feel suits their curiosity coming out of high school."
If you were to ask Emily Cole what is most rewarding about her work, her answer would certainly be the ability to promote new discussions that make the ancient world relevant to the present. "My study of ancient languages contributes to a wider understanding of how people adapt their speech to internal and external cultural pressures," she shares.

Emily is a doctoral candidate in Egyptology in the Department of Near Eastern Languages and Cultures (NELC), at the University of California, Los Angeles. There she focuses on the linguistic and social histories of ancient Egypt. Specifically, she explores the multicultural environment of the Ptolemaic and Roman periods, examining how Egyptian culture adopted and adapted foreign practices. For her PhD, she is conducting a sociolinguistic study of translation, where she investigates the processes of translation in ancient Egypt and the role of translators in ancient society.

Her passion for the ancient world was fostered at TFS, where her interests swayed between the arts and sciences. Inspired by TFS classes in history and Ancient Greek, she earned a Bachelor of Arts degree from the University of Oxford, before pursuing graduate school. During her master's program, Emily worked for five years as an excavator and team-leader on the URU Fayum Project in Egypt at Karanis, to uncover the history of the region. As a result, she co-authored the first excavation summary and her findings were presented at an international conference on the Fayum region in Würzburg, Germany, in 2012.

Emily shares her inspiration, enthusiasm and knowledge with colleagues and students. From mentoring Egyptian and American students in the field, to her teaching roles within the university, she explains that it is imperative to make the past relevant to students today. "There is nothing better than working through texts and finally having the connections fall into place," she notes. This extends beyond the lecture halls, where she also brings her passion for archaeology and ancient history to children in schools throughout South-central LA. In addition, as an active member of the American Research Center in Egypt (ARCE), she is engaged at the national level to increase graduate student conference participation and interaction.

In 2013, Emily was awarded a fellowship from the German Academic Exchange Service (DAAD) to work at the University of Heidelberg in Germany, where she was able to establish new relationships with the European research community. Emily has clearly found a way to connect the ancient and modern, arts and science, and it will be exciting to watch this rising star.
Back