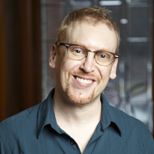 "I was really honoured to be asked to host TFS' 50th Anniversary Gala. It was especially flattering because I wasn't the best student. It was only later that I realized TFS helped me develop the skills that are the foundation for everything I've done."
Depending on when you ask, Steven Shehori calls himself a writer, a comedian or a failed musician. The reality is he's nationally recognized as the first two things because of the last.
After graduating from TFS in 1989, Steven studied film and drama at McMaster University, while trying to break out as a singer and guitarist. "My band was going nowhere and one day a friend of mine working at Paramount suggested I write a movie script because she had the connections to get it read. So I hammered out a screenplay in four months, but by then her job had ended! In the end, nothing really happened with the script except it gave me the confidence to start thinking of myself as a writer."
Steven never looked back or, as he jokes, tried anything quite that ambitious again.
A three-time Gemini Award-nominee who has also received 10 Canadian Comedy Award nominations — and three wins — Steven has written and performed comedy that has aired on Canadian, American, European and Australian national television, including CBC's This Hour has 22 Minutesand The Hour with George Stroumboulopoulos. He's a regular contributor to The Huffington Post as a humourist and celebrity interviewer. As a member of The Shehori Brothers (with his brother Daniel), he has produced more than 100 live comedy shows, five full-length theatre productions and the siblings were head co-creators and producers of the Shehori Brothers' Character Night, the longest-running show in the history of Second City Toronto.
"Over the years I've kept a pretty diverse resume: directing, acting, voice work, song writing and even video editing," explains Steven. "But I guess I'm a writer first and foremost." Smiling, he adds, "I've also got hand-model hands to fall back on, should the industry slow down."
In 2002, Steven added publicity and training to his repertoire. Through his company Sweat Equity Productions, he earns TV, press, radio and internet exposure for clients in the comedy, music, theatre, dance, charity and business worlds. He also offers seminars on topics like ‘DIY Publicity' for actors, comedians, musicians, and entertainment producers and promoters.
Back