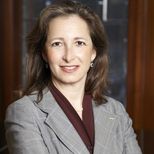 "I get to work with some of the world's best neuroscientists, neurosurgeons and cancer biologists. We must have superb science and then the backing of the business world to translate it to peoples' lives. That's the dream."
Molly Shoichet is a University of Toronto scientist with a global vision. "I want to advance knowledge, and impact people's lives, that's my dream."
As a science undergraduate from Massachusetts Institute of Technology, a PhD recipient from the University of Massachusetts, Amherst and now the Canada Research Chair in Tissue Engineering at U of T's world renowned Donnelly Centre for Cellular and Biomedical Research, she is well on her way.  Molly is nationally recognized for designing methods of facilitating nerve cell repair and regeneration to treat patients with cancer or traumatic injuries of the brain and spinal cord.
"I design polymers," she says simply, "to deliver drugs and cells where they need to be."
Working with some of the world's best neuroscientists, neurosurgeons and cancer biologists, Molly and her team are taking steps to design a polymer that, when combined with potent drugs, will kill cancer cells and not healthy cells. She also hopes custom-designed polymers can help transplanted stem cells survive longer and integrate into existing tissue so patients with spinal cord injuries can learn to walk again.
Molly's achievements to date have earned her some of the highest honours awarded to Canadian scientists. In 2008, she was one of 10 researchers nationwide to receive a Killam Research Fellowship, Canada's most prestigious research award. Her recent induction into the Canadian Academy of Health Sciences earned her the distinction of being the only known person who also holds fellowships in the Canadian Academy of Engineering and the Royal Society of Canada's Academy of Science. In January 2011, Molly received the Order of Ontario, the highest official honour in the Province of Ontario. She was awarded the Queen Elizabeth II Diamond Jubilee Medal in February 2013.
While privileged to have received these honours, "the things that I'm most proud of happen every day," she says. "I enjoy working closely with grad students and postdocs and watching them grow and flourish, and seeing our research progress and advance knowledge. The awards are recognition for those things. It's those things that matter."
Back