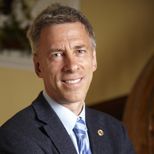 "Dad put a huge value on education. He'd heard great things about TFS and was keen to give his son the best education. I'm so grateful for what I've experienced in life, in the field and in Canada, including the preparation I received through TFS."
"A servant of humanity." That, in a nutshell, is how Walter Dorn describes himself and the 30-year career that has taken him from TFS to Canadian Forces College (CFC) in Toronto, and from East Timor to the International Criminal Court in The Hague. The Chair of the Department of Security and International Affairs at CFC, Walter is an "operational professor," spending almost as much time in the classroom as in the field, where he is a consultant to the UN's Department of Peacekeeping Operations.
"I seek to find a way to make the UN more effective in its role as an enforcer of peace," he explains.
In 1999, Walter travelled to the Southeast Asian island of East Timor as a UN electoral officer overseeing the country's first referendum on independence. "It was the best time of my life because I was a part of the process of bringing freedom to people under colonization for centuries." But it was also one of the worst times: in the Indonesian-led reign of terror that followed Timor's vote for independence, a member of Walter's team and several friends were killed. The horrors became the impetus for much of his work today.
While a student at TFS, Walter nurtured a love of history, but his top grades were in science. He studied chemistry at the University of Toronto, earning Bachelor, Master's and PhD degrees. After stints with Yale and Cornell Universities and some UN field work, he returned to Canada to study and teach on peace and conflict issues, arms control and international security. His book, Keeping Watch: Monitoring, Technology and Innovation in UN Peace Operations (2011), makes recommendations to enhance peacekeeping through technological innovation. "I ask how science can be used to enhance peace in the world."
This summer, Walter will be back in the field, on leave from the CFC to serve in a UN policy advisor role in the troubled Middle East.
"I'm so grateful for what I've experienced in life, in the field and in Canada, including the preparation I received through TFS."
Back