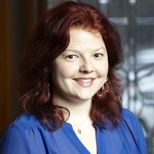 "I had such tremendous teachers. Across the board, our teachers pushed us and did a great deal to cultivate a real confidence in us as students."
Lara Brady has spent the last 12 years educating young people around the world about the importance of family, freedom, compassion and respect. Together with her father, George, she has turned the fate of her aunt Hana, who died at age 13 in Auschwitz, into a global lesson of tolerance. With Lara heading public relations for the Brady family and their numerous projects, Hana's story has become a bestselling children's book, a film, a children's play, a radio documentary and a CBC television feature.
"We thought that the last chapter closed with Hana's death, but the story suddenly came alive again and now Hana is teaching millions of kids around the world," says Lara.
Hana's modern-day tale took hold in 2000, when Lara was in her final year at TFS. A Japanese museum director wrote to ask about the owner of a small suitcase from the museum's collection. "The suitcase belonged to Hana," Lara explains. The Brady family ended up sharing their story with the museum director's students and, soon, the world. Hana's Suitcase, written by Karen Levine and published in 2002, is now in its 14th printing in Canada alone and it was chosen by Canadian children as a winner of the 2003 Silver Birch Award.
"Kids are just fascinated by Hana and George's childhood and the ensuing issues of isolation and racism, and by my father's escape from Czechoslovakia to Canada," says Lara, who also works as an account executive at Toronto's The Gabor Group. "We receive letters from children written in Hungarian, German and Italian, all wanting to share how they take inspiration from Hana and George."
In addition to participating in speaking tours and many outreach programs, Lara was instrumental in launching an interactive website that was nominated for an International Digital Emmy award in 2010. A graduate of U of T and Ryerson University, she facilitated a series of interactive webisodes on iTunes last year.
"It's been a wonderful journey to share such a personal story with millions of children around the world."
Back