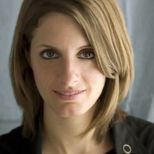 "Being a first-generation Canadian at TFS had a big impact on me. Everyone in my close circle of friends was also first-generation. It was a great experience to share culture and tradition."
A trip to the United Nations in New York is one of the defining moments in Christina Piovesan's career as a film producer. It was 2011, one year after the release of Samuel Goldwyn Films' The Whistleblower, a feature film produced by Christina and starring Academy Award Winner Rachel Weisz as a real-life Nebraska cop who served as a peacekeeper in post-war Bosnia and outed the UN for covering up a sex trafficking scandal.
"We screened the movie at the UN and then I was able to sit in on a discussion with UN officials talking about issues of accountability," says the TFS grad. "As a result, they are now changing their policy on accountability. It's quite astounding!"
Astounding is an apt description of Christina's career. In the last four years alone, she has produced four films, all under the banner of her production company First Generation Films. FGF's first feature film, Amreeka (2009), premiered at the Sundance Film Festival and won the International Critics Week Award at Cannes. The movie was named one of the top 10 independent films of 2009 by the National Board of Review. Following The Whistleblower, she produced The Lesser Blessed, which debuted last fall at the Toronto International Film Festival, and co-produced Red Lights(2012), starring Robert De Niro and Sigourney Weaver.
After graduating from TFS in 1994, Christina studied cultural studies at McGill University and then earned a Masters degree in film production at the University of Southern California. Although she spent many of her TFS high school years producing theatre productions, she dreamed of becoming a director. At USC, however, she found herself gravitating to production and loving it.
Her vision for FGF is to become a "leader and innovator in creating content for a global audience." With a full slate of feature films underway, she is expanding into television with a reality TV series and a pilot newsmagazine show about app culture.
Back