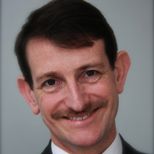 "There's something innate in human beings about wanting to climb a mountain, not because it's there, but to simply explore, push boundaries, learn new things. Space is our next mountain. Learning about it teaches us about ourselves and our place in the universe. If I'm contributing to that, I think it's worthwhile."
Albert Haldemann's resume is, quite literally, out of this world. A payload and assembly manager with the European Space Agency (ESA) who started his career on NASA's Mars Pathfinder Science Team, Albert has participated in three successful Mars landings, all with NASA. He's now overseeing the integration and testing of the ESA's ExoMars spacecraft in preparation for its 2016 launch to the Red Planet aboard a Russian rocket.
"My fascination with space began as a teenager," admits the 1984 TFS grad. "I read a lot of science fiction in high school at TFS."
Always at his happiest when building things, Albert chose to study physics at Switzerland's Université de Neuchâtel because "I wanted to make a warp drive work," but he soon discovered that he was more suited to experimental work. After earning a PhD in planetary science at the California Institute of Technology, he began a post-doctoral fellowship at NASA, just one month before the Mars Pathfinder landing in 1997. When the first data transmissions began, Albert and his colleagues were tapped to receive them. "I was crazy, running back and forth trying to compare the data with our predictions on a poster in the hallway," he laughs.
Albert's role today is even more hands-on. Responsible for the interface between the instruments and the spacecraft at ESA, he checks to ensure the individual components of the ExoMars elements work together and meet the objectives of the space agency's ambitious Mars exploration program.
"The work I did with NASA was the Mr. Spock part of my career," explains the science fiction junkie. "I'm now doing more of the Scotty role."
Not to say Albert is done exploring. "I plan on being alive when the first human sets foot on Mars!"
Back