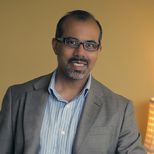 "I believe what TFS has taught is the philosophy that education is not just about passively receiving information and it does not end in the classroom. Real scholarship and education is about learning even as we teach. It's about integrating diverse ideas, sometimes from different areas, in unique ways to impact the world... I use to this day the principles I learned at TFS."
Dr. Karandeep Sonu Gaind ‘86, psychiatrist and passionate advocate for improvements in care for the mentally ill, was delighted to be selected as the fourth recipient of the annual Le prix de distinction des anciens élèves de TFS.
Dr. Gaind has been a leader in bringing the plight of the mentally ill to the forefront by increasing public awareness, laying the groundwork for policy changes to the healthcare system and working for change in how psychiatric services are provided in Ontario.
Throughout his career, Dr. Gaind has influenced health policy on a provincial and national scale. Under his leadership, he has helped to develop policies to increase medical services to underserviced rural and northern communities, implement initiatives to improve access to community care for children with mental health challenges and, most recently as of September 2011, had his precedent-setting Clinical Care Modifier Model, developed to increase access to care for those mentally ill patients most at risk, adopted across psychiatric care in Ontario.
Dr. Gaind has received wide acclaim and numerous awards for his outstanding leadership and accomplishments.
Dr. Gaind is a TFS parent at the Mississauga campus.
Back