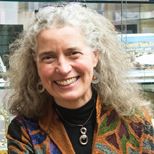 “Toronto French School, I feel, has stated unequivocally that it values those who labour precariously in the arts. It tells me that TFS values determination and openness to the unexpected as truly as it did when I was one of its students."
Award winning, bestselling author and poet Martha Baillie '77, was presented with the second Le prix de distinction des anciens élèves de TFS at the annual Banquet des anciens élèves on May 7, 2010. Martha's most recent novel, The Incident Report, was long-listed for the Scotiabank Giller Prize and her other novels and poems have garnered much acclaim. Recognized for her unwavering passion, authenticity and determination, Martha inspires all those around her to be unafraid and stay true to one self.
Martha Baillie is the author of four novels. Martha has been published in Germany and Hungary; her non-fiction has appeared in Brick: a literary journal, and her poetry in journals across the country.
Back